It was a brutal February, not winter

Pre-winter, but worth mentioning because of the stretch of abnormally cold weather that occurred from Nov 12 through Nov 22. On some days, our temps were 20 to 25 degrees below normal.

On seven days during that stretch, our temps dipped into the teens. On Nov 18, TOL recorded a low of 9 degrees. We received a few inches of snowfall during this period.

That's not unusual weather for mid-January, but for mid-November, it was a bit bizarre, especially because of the duration.

Speaking of bizarre, this was a record month for the lack of snow. In fact, TOL recorded no measurable snowfall. A snowless month, sort of.

On only two days, TOL recorded a trace of snowfall. I think that 1/8" is required for a snowfall to be considered measurable.

This was only the third time that Toledo recorded no measurable snowfall for December, since record-keeping began for Toledo in the 1870s.

The other Decembers that produced no measurable snowfall in Toledo occurred in 1889 and 1931.

I never saw snow fall last December. One evening after leaving Mutz, I observed that some snow flurries had accumulated along my vehicle's windshield wipers.

December 2014 was relatively comfortable and easy. TOL temps were slightly above normal. We experienced several days with temps in the 40s and 50s.

Our precip was well below normal. TOL recorded only 1.09 inches of precip. Ave for December is 2.68 inches.

For TOL, our temps were slightly below normal, total precip matched the average, and our snowfall was approximately normal.

A cold stretch occurred from Jan 5 through Jan 15. TOL recorded five days with below zero temps and four other days with temps in the single digits.

TOL reported a measurable snow depth on 22 of 31 mornings with a max snow depth of 4.0 inches.

This freakish month was our winter.

When combining snow AND cold, February 2015 may be the most wintry month of all time for Toledo. Its closest competitors could be January 1918, January 2009, January 2014, and February 2014.

February 2015 started with a big snowstorm that dropped 10 to 14 inches of snow across the Toledo area. At our West Toledo home, I recorded more snow (13.5 in) in the first two days of February than all of December and January combined.

On Feb 20, TOL recorded a low temp of minus-19. That became the new all-time record low temp for the month of February, and it was the second-coldest temp ever recorded for Toledo. On that morning, temps within Toledo and immediately around the city ranged from -10 to -15.

Regarding the record snowfall, more than half the month’s tally fell in its first four days, and most of that occurred on Feb. 1, when a strong winter storm dumped 10 inches at Toledo Express Airport and even higher amounts nearby.

brief warm-up the next weekend, including some light rain, took away some snow, but otherwise Toledo and environs kept a white carpet for all of February, which meteorologists said was an important factor in the sustained deep freeze that settled over the region after Feb. 11.

During February’s remaining 17 days, Toledo’s official high temperature at Toledo Express Airport reached 30 only once, on the 22nd, and that was after a morning low of 2.

On only two other days did the mercury get above 24. And on more than half of those days — nine, to be precise, and including the final two — the morning low was below zero.

The lowlight of all that cold was the morning of Feb. 20, when the temperature tumbled to -19 at Toledo Express and even further in parts of southeast Michigan. It was the coldest February temperature recorded for Toledo and the second-coldest ever, surpassed only by a -20 reading back on Jan. 21, 1984.

Lake Erie froze over completely for only the 4th time in 40 years and the first time since 1996. It nearly froze completely, during the previous winter. 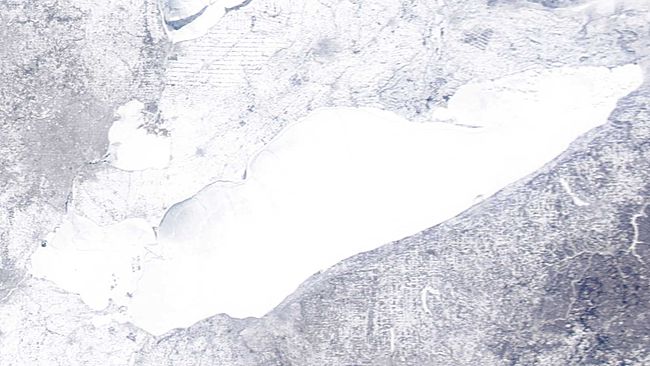 The Toledo area had near continuous snow cover from January 5 through March 10.

TOL recorded 5.4 inches of snowfall with 4.1 inches of that snow falling on March 1. Average snowfall for March is 5.7 inches.

TOL recorded only 1.34 inches of total precip. Average is 2.48 inches.

Area streams and rivers experienced ice jams and flooding, but the lack of rainfall helped minimize the effects, which were bad enough for some areas.