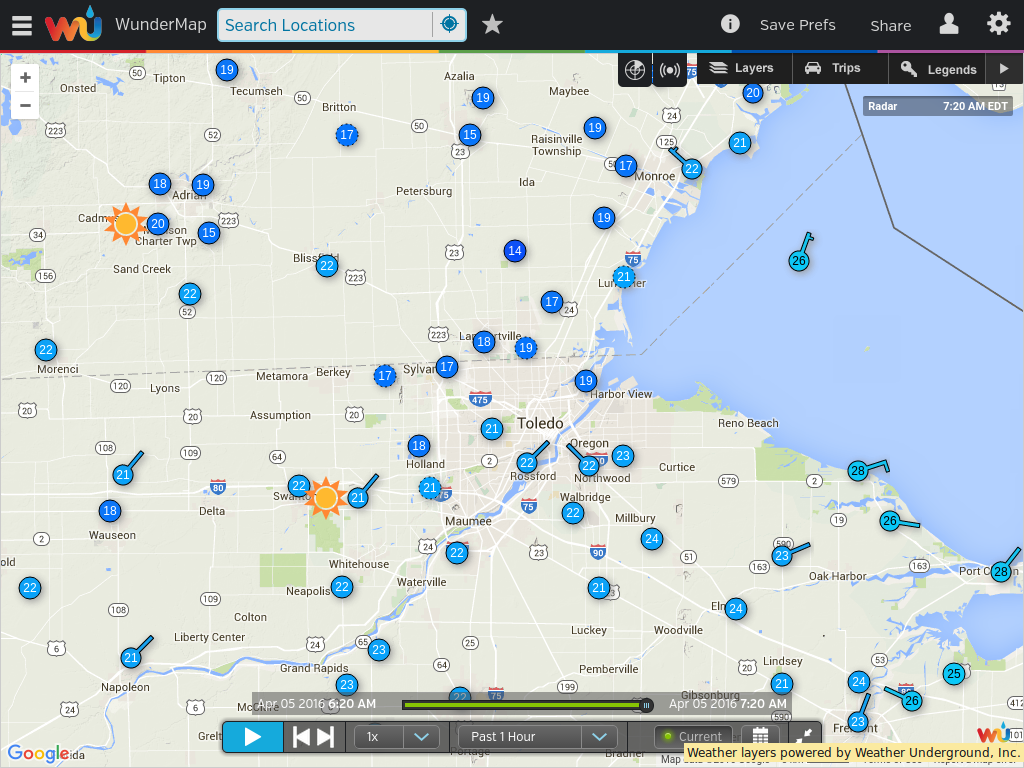 Today: Sunny, with a high near 40. Northeast wind around 7 mph becoming southeast in the afternoon.

Tonight: Increasing clouds, with a low around 30. Southeast wind 7 to 13 mph.

Wednesday: A chance of snow showers before 10am, then rain showers. High near 54. Breezy, with a south wind 17 to 23 mph. Chance of precipitation is 80%. Little or no snow accumulation expected.

Wednesday Night: Showers, mainly before 1am. Low around 38. Southwest wind 15 to 18 mph. Chance of precipitation is 90%. New precipitation amounts between a quarter and half of an inch possible.

Thursday: A chance of showers. Cloudy, with a high near 44. Northwest wind around 14 mph. Chance of precipitation is 50%. New precipitation amounts between a tenth and quarter of an inch possible.

Thursday Night: A chance of rain showers before midnight, then a chance of snow showers. Cloudy, with a low around 28. Chance of precipitation is 40%. Little or no snow accumulation expected.

Friday: A chance of rain and snow showers. Mostly cloudy, with a high near 39. Chance of precipitation is 30%.

Friday Night: A chance of snow showers. Mostly cloudy, with a low around 22. Chance of precipitation is 30%.

Saturday: A chance of snow showers before 9am. Partly sunny, with a high near 33. Chance of precipitation is 30%.

Saturday Night: Partly cloudy, with a low around 22.

Sunday: Mostly sunny, with a high near 44.

Sunday Night: A chance of rain and snow showers. Mostly cloudy, with a low around 36. Chance of precipitation is 40%.

Monday: Rain and snow showers likely. Cloudy, with a high near 57. Chance of precipitation is 60%.

synopsis...
high pressure centered over lake michigan will cross the area
today and then move off the east coast on wednesday. low pressure
from the plains states will move across the central great lakes by
wednesday evening dragging a cold front across the area wednesday
night. a trough will rotate southeast across the area on thursday.
high pressure will slowly build over the region from the northwest
at the end of the week

near term /until 6 pm this evening/...
the central portion of the area has cleared. the thinking earlier
was that the clouds over ne ohio and nw pa would drift west. this
no longer seems likely. with the high just off to the northwest
and moving this way expect the remaining clouds to continue to
dissipate. the daylight hours will be mainly sunny all areas.
temps will get off to a chilly start this morning and given the
airmass overhead...highs will struggle to get out of the 30s over
the eastern third of the area. winds will be less than yesterday
and that should make it feel a tad warmer.

short term /6 pm this evening through friday night/...
active weather will continue across the region with a period of
unseasonably cool and wet weather expected through the end of the
week. we should be able to stay dry tonight but after that precip
is likely every period. the models are still showing differences
with the low track for wednesday. fortunately the timing of the
onset of the precip on wednesday is similar. expect showers to
rapidly spread east across the area during the morning and midday
hours. if the precip gets going earlier than expected across nw
ohio there may be a brief period of snow or mixed precip. high
precip chances will continue wednesday night. the models are also
similar with the movement of the cold front across the area
wednesday night. good cold air advection is expected but it will
remain warm enough for showers on thursday. the models continue to
show differences for thursday. similar to the past couple of days
the gfs develops a secondary low which moves across the area. the
ecwmf shows troughiness but little reflection at the surface.
either way showers appear likely with temperatures again well
below normal. by thursday evening temps and critical thickness
will get cold enough for a possible switch to snow. not
anticipating any accumulation but it will be rather raw outside.
it's hard to believe it...but friday may end up being as cold as
monday was. will keep mixed showers going during the day and more
snow at night. accumulation will be tough during the daylight
hours but the nighttime hours could end up being a different
story.

given the changing airmasses have not strayed too far from
guidance for temps.

long term /saturday through monday/...
saturday starts with some lingering lake effect snow in the east.
by daybreak saturday the 850mb temps plunge to -14c to -16c and a
lake temp hovering around 6c will be enough lift and moisture.
however this far out will just continue with chance pops.
models coming into much better agreement moving high pressure across
the lower lakes sunday...and off the mid atlantic coast monday.
this will allow the next system to approach monday. luckily
warm front lifts north first ushering in warmer conditions...and
precip should fall as rain.